Have you ever walked with or followed a butterfly? Recently, I set out to do this.

For years now, I’ve been entranced by the little cabbage white butterflies that flit and float across the Thoreau Farm kitchen garden. They’re our most frequent visitors. To me, they look like tiny slips of blown paper riding on the stream of a steady breeze, cruising just inches above all of the shrubbery. They seem always to be here. I thought it was time to learn more about them. And maybe I could get a decent photo of one, too. 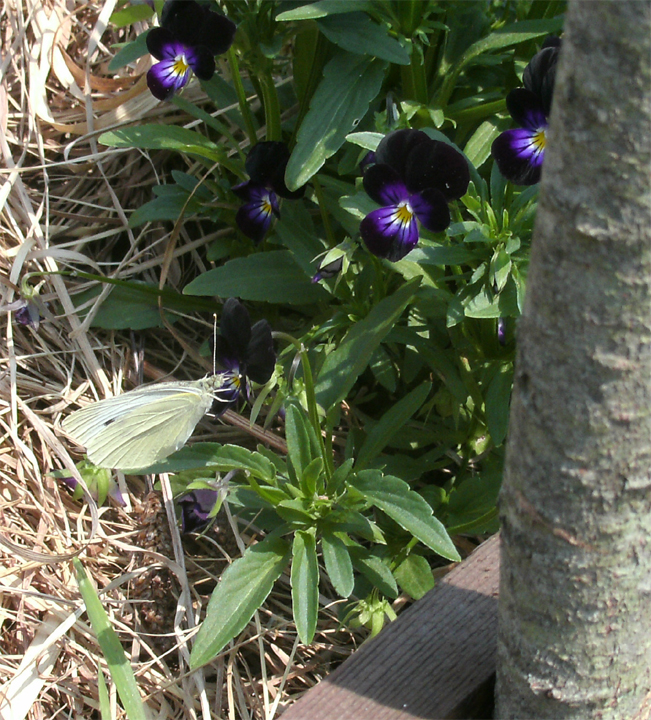 When I told our garden expert Debbie Bier that I was going to write about cabbage whites, she told me explicitly, “I don’t like them.” I wasn’t surprised. Each print and online source I consulted was quick to point out their caterpillar predecessors’ penchant for damaging plants in the mustard family, which includes cabbages and radishes. But I also discovered how to determine their gender. The male butterflies have one black dot in the center of each upper wing, and the females have two. And so armed with fascination and this information and my camera, I was ready.

As you may imagine, the path of a butterfly is not easy to follow. The differences between feet and wings become quite clear. I had to wait while he (with one dot) explored the tops of the lilac bushes. Then he fluttered behind them, out of sight. No straight lines for him! His was a whirlwind trail: back and forth, hither and yon. Every ten seconds he landed: perhaps on a plant, like the purple flower of the nearby cow vetch. But then he began to light on various spots on our driveway. What could possibly attract him to dirt or gravel? I couldn’t tell. And he never stopped long enough for me to investigate. Still, I wandered on behind my erratic leader.

At one place in the road, I watched him land next to something white. Oh, no! It was the body of a fallen comrade. He (also with one dot) must have flown too close to the front of a moving vehicle. He lay on his left side, his lower wings already tattered and deteriorating, his little life already going to ground. The live one stopped at the body, then flew a few feet away, and then came back for a second look. He sat next to it for a few seconds, then flittered away again. I lifted the dead one and placed him among the goldenrod growing along the roadside, where he would not be run over again.

Henry Thoreau noted only occasional insect and butterfly sightings in his journal. In his day, there were no illustrated guidebooks to help observers identify species. In fact, Thoreau lamented that the only publication to address these small creatures was a 459-page document called “A Report of the Insects of Massachusetts, Injurious to Vegetation.” It had been written by Thaddeus William Harris, the Harvard College librarian, who had also served as Thoreau’s natural history professor. But even with a personal connection to the author, the report could not escape Thoreau’s judgment:

“The catechism says that the chief end of man is to glorify God and enjoy him forever, which of course is applicable mainly to God as seen in his works. Yet the only account of its beautiful insects – butterflies, etc. – which God has made and set before us which the State ever thinks of spending any money on is the account of those which are injurious to vegetation! … Massachusetts has published her report on ‘Insects Injurious to Vegetation’ and our neighbor the ‘Noxious Insects of New York.’ We have attended to the evil and said nothing about the good. This is looking a gift horse in the mouth with a vengeance. … Though God may have pronounced his work good, we ask, ‘Is it not poisonous?’” (Journal, May 1, 1859)

Alas, the cabbage whites are yet another example of a life form that Henry Thoreau never saw. They are not natives, and they were brought to North America in the later 1860s. Would Henry have gone with me today, to watch this little guy, and to see if we could find some attributes of good amidst the bad? I’d like to think he would.

My winged friend made one more loop around the garden. Then he suddenly sped toward the woods to the east, flying faster than I had expected. By the time I rounded the house, he was out of sight. Where he was headed and what he would do there, I could only imagine. He left me with one good photo and the experience of an hour well spent. And the anticipation of again meeting him or another cabbage white soon.