“Spring.” What an appropriate word! Over the past few weeks, all sorts of unexpected plants have begun to spring up in our yard. Unfortunately, some of them pose more questions than they answer.

When we moved to this property in December, the landscape was brown. All of the plants had been cleared out or trimmed close before our arrival. Now a few colorful hyacinths and daffodils dot our borders. Obviously somebody planted them on the west side of the house and along the back edge of the yard. But why are a few also blooming in the two-foot-by-two-foot plot between the two equipment sheds? Who will ever see them, besides the next-door neighbors and the skunk who trots through here every night? I may need to move them when the petals are gone.

All winter long, I stared out of the living room window at an empty dirt patch that lay under a tree in the front yard. I couldn’t wait for the chance to sprinkle grass seed there. But before I could get to the hardware store, fresh shoots of hostas began to emerge from the soil. I was both annoyed and overjoyed at the sight. Annoyed, because I had hoped to “make the earth say grass” at that spot, to paraphrase Mr. Thoreau. But since I had also planned to line the front edge of the house with a row of hostas, I was grateful. I didn’t need to buy any new ones at all. I just dug these up and transplanted them. They already seem happier in their new locations.

In the meantime, still more greenery has followed the hostas into what I thought had been a barren space. I don’t recognize them yet. But I’ve decided not to mow them.

Two parallel rows of peony bushes have made themselves known in the back yard. Whether they’ll end up showing us pink or white blossoms is anybody’s guess. That’s another section that I’ll have to pay attention to, whenever I’m mowing. I’m not exactly sure what I’ll do with the burgeoning carpet of the lily of the valley plants that have spilled over from their original bed. They may get cut.

My Midwestern friends should be pleased to know that I have diligently pulled out – with their roots intact – every sprig of garlic mustard that I’ve seen on the property. People in the Northeast don’t seem to be as concerned about this invasive species as residents in the Midwest are, I’ve learned. But I can’t escape my prairieland training. Out they’ve come.

Thoreau once wrote in his journal, “The humblest weed is indescribably beautiful.” (January 11, 1854) Well then, Henry would deem our lawn to be unbelievably stunning. It’s full of all kinds of tiny flowering plants. Grass is a threatened minority, and the overall color is more purple-blue than green. We’ve got violets and creeping Charlie galore, along with the occasional stray sprays of grape hyacinth. Then there are small anonymous white buds and yellow buttercups that add more botanical frosting to the cake. Fortunately, none of them seems to mind very much when the mower passes over. I transplanted some, but I can’t catch them all. 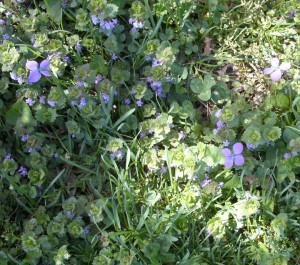 It’s difficult to remember the drab grays and browns of winter, now that there’s so much color surrounding us. Yes, Henry, I agree with you that the weeds are beautiful. But I’m daily reminded of the words of another sage: TV’s Gomer Pyle, as played by Jim Nabors. It never took too much prompting for ol’ Gome to shriek, “Surprise, Surprise, Surprise!” I mimic him almost every day.

One Response to Surprises