Tradition holds that robins mark the return of Spring. When the month of March comes around, people begin to report with some glee of the robins they’ve spotted. The sight of these colorful birds yard-bobbing for worms assures us that winter is finally over. (Never mind that some robins now seem to stay with us year-round.) I used to believe in this myth myself.

But when I lived in Illinois, I noticed another, truer feathered symbol of Spring: the red-winged blackbird. Or more specifically, the males of this species. In late February or early March, these guys came north to stake out their territories. I would drive around the open prairie or through partial wetlands, and I would marvel at the sight. It was as if a delivery van had passed by, and someone had tossed out a bird every twenty yards. Individual male red-wings were perched in small trees, on fence posts, or hanging onto last year’s cat-tails. They distributed themselves evenly. Each one left just enough footage on either side so that he wouldn’t encroach on the neighboring birds’ spaces. When there were disputes, two blackbirds would be seen swooping at one another. By a certain time, however, all the land lining the Midwestern highways was claimed.

Henry Thoreau thought red-wings won the springtime coin toss, too. “No two have epaulets equally brilliant,” he noted on May 14, 1853. “Some are small and almost white, and others a brilliant vermilion. They are handsomer than the golden robin, methinks.”

When Thoreau embarked on his Journey West in 1861, he reached the Mississippi River in late May. There, he wrote in his notebook, “Red wing b. bird the prevailing to Mississippi R.” The birds would have been busy with their young by then. He still could have picked out their voices coming from the marshy edges of the riverbanks. 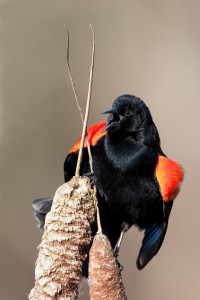 I wish I could mimic them. I can whistle like cardinals and chickadees, but I cannot recreate the call or song of the red-winged blackbird. There’s a buzzing in it that appears to be beyond human duplication. Thoreau was similarly intrigued. He defined the sound in his journal on April 22, 1852:

The strain of the red-wing on the willow spray over the water to-night
is liquid, bubbling, watery, almost like a tinkling fountain, in perfect
harmony with the meadow. It oozes, trickles, tinkles, bubbles from his
throat, — bob-y-lee-e-e, and then its shrill, fine whistle.

Twenty-first-century birders hear “conk-kar-ree,” “konk-la-ree,” or “o-ka-lay.” But to Mr. Thoreau’s ears, the red wing said “bob-y-lee-e-e.” Nevertheless: once you hear the sound and can link it to the bird, you’ll never forget it.

I recall clearly the March day when I was traveling through western New York. I decided to stop at Niagara Falls, just to watch the water. The main portion of the park was still closed for the season because of the thick ice and snow on the trails. Chunks of ice roared past us and quickly disappeared over the rim. It was mesmerizing to watch and try to follow one ice floe until it was lost from sight. As always, the waterfall was incredibly loud.

Suddenly I heard another sound, a more delicate sound, a sound I was familiar with. Yes, it was March, but was I merely imagining my bird of Spring? I looked around, wondering where a red-winged blackbird could be hiding. He turned out to be in plain sight, sitting at the top of one of the lone bare trees growing out from the rocks. And he was singing at the top of his lungs, competing with one of Nature’s largest sound-makers, streaming right behind him. I couldn’t help but smile and wish him a successful year. He sure chose a great place to raise a family.

2 responses to “(Red)wing of Spring”