What Henry Didn’t See…Though Walter Did

On February 20, 1855, Henry Thoreau listed “the quadrupeds of Concord” in his journal. He named more than two dozen mammal species. The largest one he found was the Northern river otter.

This was not the first time that Thoreau outlined this group of animals. In his 1842 essay, “Natural History of Massachusetts,” he reminisced about encounters with muskrats and foxes. He was somewhat silent about the rest of the mammals said to be then living in the state. “The bear, wolf, lynx, wildcat, deer, beaver, and marten, have disappeared,” he wrote. “The otter is rarely if ever seen at present; and the mink is less common than formerly.” We can sense his dismay at having missed the chance to meet many of these creatures himself.

If we generated such a list today, we would come up with a number of animals that Thoreau never had a chance to see. Among them would be the afore-mentioned beaver and the white-tailed deer, but also the Eastern coyote.

Long-time saunterer J. Walter Brain has spent decades following in Thoreau’s footsteps, exploring the landscapes of both Concord and Lincoln. He recalls an afternoon when he was walking alone through the area behind Thoreau’s birth house and suddenly came upon a pack of at least a dozen coyotes. “They stood their ground,” he says. “They didn’t move. They didn’t make a sound. They just stared at me, the whole pack.” Walter backed up quietly, slowly, and deliberately, until he felt comfortable enough to turn away and head in another direction. It’s a memory that returns each time he passes through the neighborhood, even though the encounter took place at least fifteen years ago. He hasn’t seen coyotes there since. But his experience has led him to claim that the area framed by Old Bedford Road, Virginia Road, and Hanscom Field is “the wildest part of Concord.” 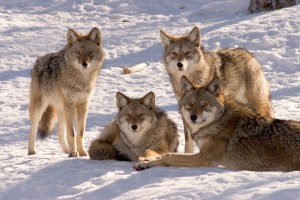 Coyotes are not strangers to us. Researchers with the Cook County Coyote Project in Illinois (http://urbancoyoteresearch.com) say that coyotes generally go unnoticed but live all around us: especially in the suburbs, in drainage ditches near shopping centers, and at the edges of overgrown acreage. On most occasions, we co-exist without interaction or interference. It is the rare rogue coyote that will attack a human. Unfortunately, when this happens, the whole species tends to be unduly blamed because of the actions of a few. Coyotes can get an unwarranted bad rap.

You don’t have to trek out to the American prairie or plains to hear coyotes at night. Wildlife illustrator and printer Abigail Rorer once told me that she enjoyed hearing the barks and yips from the pack that lives close to her home in Petersham, out by the Quabbin Reservation on the western edge of Worcester County. She wished she knew what they were doing, and what they were saying to one another.

Because coyotes are crepuscular and appear most often at dusk and dawn, it’s rather unlikely that hikers will encounter them in the acreage behind the Thoreau birthplace in Concord. Instead, you’re apt to find mere paw prints in the mud. No worries.

And yet: “We need the tonic of wildness,” as Henry wrote. He spent many hours walking this same territory, in search of The Wild. Is it enough to know that we share this place with such creatures as coyotes? Or must a gray shadow slip past us in order for us to believe it? Should we long to be confronted with it eye to eye, as Walter once was?

I am happy enough to merely know of and to hear; I find it not necessary to experience. Still, I think Henry Thoreau would have sought the animals out. And he’d have been pleased to include “Canis latrans, Eastern coyote,” on his list of Concord’s quadrupeds.

3 responses to “What Henry Didn’t See…Though Walter Did”