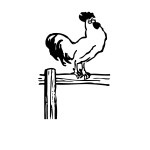 What kinds of stories can convey the full human dimensions of climate change?

I take up that question in today’s Boston Globe Books section, in a “By The Book” essay on a recent collection of short fiction, I’m With the Bears: Short Stories From a Damaged Planet (Verso). As it happens, the volume has an introduction by Bill McKibben, and I’ll be posting an interview with him — not about these stories but about climate and politics (and, yes, Thoreau) — here on The Roost this coming week.

The Globe essay begins this way:

At a decisive moment in Margaret Atwood’s “Oryx and Crake,” her post-apocalyptic novel of a near-future ravaged by global warming and genetic technology run amok, a thought repeats itself in the mind of the main character: “We understand more than we know.”

And it’s true. We often grasp a situation, instinctually or emotionally, even morally, before we’ve processed it intellectually. But the inverse, it seems, can also be true. There are moments — and this may be one of them — when we know more than we understand.

The overwhelming scientific consensus tells us that we already know what we need to know about climate change in order to make the case for urgent action. We know that we face the very real risk of catastrophic consequences for humanity within this century. We know this, or we’re supposed to. But do we understand it, really feel it, on our pulses?

This is about more than science. It’s also about the kinds of stories we write. And for environmental writers, the task only seems to grow more daunting by the day. How do you approach something as vast, frightening — almost inconceivable, really — as global warming? And especially now, as it’s shown increasingly to be not only human-caused but human-suffered? There’s a sense that it’s time to move beyond the conventions of environmental writing — and its old-school, man-versus-nature storylines — to convey the full human dimensions of the situation we face. But how?

In other words, it’s grown increasingly clear (to anyone who’s paying attention)  that climate change is far more than an “environmental” crisis — it’s also a human crisis. But even in the most sophisticated of media, it’s still almost invariably couched in environmental terms. So the question I’m posing is whether it’s possible to transcend traditional “environmental” writing about climate, in much the same way climate politics transcends environmentalism?

Surprisingly, to me anyway, this new collection of short fiction really does offer some pretty bracing suggestions. But I also want to note two recent nonfiction books (which I didn’t have space to discuss in the Globe piece) by prominent environmental writers — Carl Safina and David Gessner — both published in the past year (or thereabouts), which seem to struggle with these questions. In their own very different ways, Safina and Gessner seem symptomatic of our moment — environmental writers striving to give form and voice to a new, disorienting consciousness in the face of the climate crisis.

In The View From Lazy Point: A Natural Year in an Unnatural World (now out in paperback), Safina, a respected naturalist and conservationist, comes face to face with the immensity of global warming and what it means for everything he holds dear — for life, human and non-human. Alternating between close observations of changes to the ecosystems around his coastal home on Long Island and eye-opening reportage on the effects of global warming in polar regions and in tropical waters from Belize to Palau, what Safina finds is often dire — disappearing glaciers, acidifying oceans, extinction — but balanced by the resilience of life in myriad forms. And yet Safina knows that what’s coming places everything he sees in jeopardy – that, in effect, all bets are off. In the end, it’s all he can do to cling to a semblance of hope in the human capacity for expanding what he calls the “circle of compassion,” not only across continents and species but through time, to encompass future human generations – including our children and grandchildren.

As beautifully written and often wise as Safina’s book is, however, as a response to the present situation it can’t help but feel inadequate, as though dated. Inevitably, it runs up against the limitations of what can only be called conventional “nature writing,” of the Aldo Leopold school, its urgent message buried beneath layers of finely wrought meditations on seascapes and the flight of birds. Of course, to blame Safina for being a nature writer is like blaming a cormorant for eating fish. The problem isn’t the author so much as the genre itself, the whole mode of expression, in which nature serves as a kind of sacred code, fully accessible only to the initiated. Safina travels to the ends of the earth to witness the accelerating climate crisis, but at the end of the day, he’s still preaching within the seminary walls.

It’s those walls that David Gessner would bring down. In his latest book, The Tarball Chronicles, Gessner attempts to set the BP/Deep Horizon oil gusher in the context of our climate and energy realities, both politically and culturally, by way of a deeply personal, self-conscious travel narrative from the Gulf Coast in the weeks and months following the disaster. (Safina’s other new book, by the way, is Sea in Flames: The Deepwater Horizon Blowout.)

Gessner is a gifted and accomplished writer about the natural world, and his soul-baring honesty here, at times darkly comic, is refreshing and admirable. But the results are uneven. Gessner sets out, promisingly, to write a book as much about the people as the environment of the Gulf, to transcend nature writing and the orthodoxies of an outdated environmentalism — goals he lays out a bit more cogently in another new book, My Green Manifesto — yet he never quite delivers a coherent alternative. The form and conception of the book — at once freewheeling roadtrip travelogue and angst-ridden barstool soliloquy — won’t allow Gessner to delve deeply enough into the human stories he encounters: of the fishermen, ecologists, resort owners, politicians, working people, all as exposed to oil slicks, rising seas, and intensifying storms as any osprey.  Give him credit, though. He’s pointing in the right direction. He knows the perspective has to shift, that if we’re going to confront our situation honestly, we have to look clearly not just at “nature,” but at ourselves.

Which brings me back to the short stories in I’m With the Bears. As I say the Globe piece,

Despite the title (from a line of John Muir’s), the writers here are not so much with the bears as with the humans – or rather, they’re with both, exploding the notion that one can any longer choose between the two.

In one of the stories I didn’t mention, Lydia Millet’s “Zoogoing” (from her novel How the Dead Dream), a successful real-estate developer mourns some deep personal loss (the death, in the novel, of his lover), breaking into zoos at night, finding solace and some inexpressible connection with the captive animals — endangered species, the last of their kind — until he finds himself sleeping inside their enclosures. “One day, he knew, it would be men that were last.”

The rest of the Globe piece goes like this:

The best of these stories ask us to imagine, and viscerally inhabit, an all-too-near, all-too-possible human future.

Mitchell’s “The Siphoners” embeds story within story to give us an aging couple, professors of the “now-extinct discipline of anthropology,” in the anarchic year 2033 — global agriculture crippled by warming, oil at astronomical prices, their last fuel rations emptied by marauders who offer them escape in the form of “mercy beans,” euthanasia pills. Simpson’s “Diary of an Interesting Year,” set in a post-collapse Britain, unfolds in the terse and chillingly believable journal entries of a woman who flees north on foot with her husband in a desperate effort to escape societal breakdown. Paulo Bacigalupi’s “The Tamarisk Hunter” envisions the American Southwest under permanent “Big Daddy Drought,” metro Phoenix abandoned and something like martial law imposed to control the flow of water to California.

But it’s not any clever sci-fi futurism that stays with you, or any mere didacticism. It’s the acute psychological portraits, the way they cut through abstractions like “climate crisis” to bring it home, make it real. When Mitchell’s protagonist, her ailing husband slipping into dementia, considers her options, it’s the way she pauses to contemplate abandoning her helpless mate. When Simpson’s diarist faces rape, pregnancy, and murder, it’s her utter lack of epiphany, only an instinctive obedience to self-preservation. When Bacigalupi’s wily protagonist – having secretly rigged his government “water bounty” — faces the troops who arrive at his desert home, it’s the Kafkaesque paranoia of existence under the surveillance state.

But for me the strangest, and most affecting, of these stories is by the Italian novelist Wu Ming 1. In “Arzèstula,” the narrator, a middle-aged writer haunted by the extinction of her mother dialect, makes a pilgrimage back to her home village in the flooded and depopulated Po River basin. No post-apocalyptic cliché, the story offers a vision of both desolation and human resilience at once chilling and primal, yet also, somehow, spiritual: the woman and her companions, a small community of refugees, gazing ritually into the pre-dawn sky, “along the chain of millennia, through ice ages and thaws, the rise and fall of civilizations,” imagining future generations, those who have endured.

The volume concludes with Atwood’s brief and bitter “Time Capsule Found on the Dead Planet.” It sent me back to that earlier Atwood tale. “We understand more than we know.” Do we? I want to say these stories get at something desperately needed — a psychological realism, an emotional depth, almost completely missing from the climate “debate.” I don’t mean just a palpable fear (much less some naïve hope). I mean something more like the will to survive, or the capacity to love, maybe even to pray. Something we understand as human.

Grist‘s David Roberts, in his series of posts on the “brutal logic” of climate change (and in an email exchange with me last week), argues that those of us who communicate about climate “could stand to push the edge a little bit occasionally, reminding their audience, whatever audience, that climate change is some genuinely dire sh*t and that now is the time for ambition and courage.”

P.S. More (many more) thoughts on the sort of stories we write about climate change in an upcoming exchange with Paul Kingsnorth, c0-founder of the Dark Mountain Project in the UK, and author of the provocative essay in Orion‘s Jan/Feb issue “Confessions of a Recovering Environmentalist.” -WS

This entry was posted in The Roost. Bookmark the permalink.