“[I was] born July 12, 1817 in the Minott House, on the Virginia Road, where Father occupied Grandmother’s thirds, carrying on the farm.”
-Henry David Thoreau

The “Minott House” Thoreau refers to is known today on the National Register of Historic Places as the Wheeler-Minot Farmhouse/Henry David Thoreau Birth House. Locally, it is also known as “Thoreau Farm.” 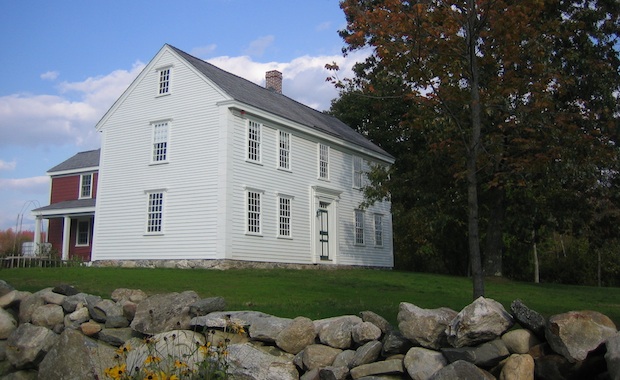 The house and surrounding farmland already had a long history before Thoreau’s birth in 1817. Native Americans cultivated the land until the town of Concord was chartered in 1635. Among the early settlers was Sgt. Thomas Wheeler who acquired substantial portions of acreage in the first and second divisions of land. Thomas settled large farms upon two of his sons, John and Timothy, along what would later become known as Virginia Road. John developed his property into a fairly prosperous farm and around 1730 built the farmhouse that stands to this day.

In 1756, the house and farm were sold to John Wheeler’s cousin, Deacon Samuel Minot, who conveyed the property to his son, Jonas. Jonas expanded the farm to nearly 104 acres by the late 18th century—one of the largest in Concord at that time. Jonas’s wife passed away in 1792 and he married Mary Jones Dunbar in 1798.

Mary Jones Dunbar, Thoreau’s widowed grandmother, married widower Jonas Minot in 1798 and moved to the farm with her children, including her daughter Cynthia, Thoreau’s mother. Cynthia grew up in the house on the Virginia Road farm, living there for 14 years until 1812 when she married John Thoreau. In 1813, Jonas died and Cynthia returned to the farm with John at Mary’s request to take over her “widow’s third” and they tried to make a go of the farm. Unable to do so during a particularly harsh stretch of New England weather, they left Virginia Road and moved back to the town center in 1818 with their 8-month-old son, Henry, who had been born on the farm.

Although he lived on the farm for only a short time, it provided both inspiration and subject matter for his writings. Cynthia’s memories of her childhood on the Minot farm were the subject of much family conversation in her later years, and they found their way into Henry’s journals. The picture they draw of life on Virginia Road provides a glimpse into early 19th-century Concord farm life as well as into the mind of Thoreau, who valued the simplicity of Concord’s farmers in an age increasingly dominated by progress and machine.

After the Thoreaus left, the farm went through several hands before it eventually became a tenant-farm in the latter half of the 19th century worked primarily by African-Americans and immigrants from Ireland, Nova Scotia, and Scandinavia. In 1878, the house was moved 300 yards down the road and a new house was built on the original site. Upon the move, the center chimney of the house was removed and it appears that many of the interior and exterior alterations evident by 1900 happened at this time.

Shortly after Thoreau’s death, and as his writings became more popular, the house took on increasing significance as the place of his birth and became a destination for Thoreau disciples, tourists, scholars and others on literary or historical pilgrimages, but remained in private hands.

In the early 20th-century, the house came into the hands of James Breen, Sr., and his family, Irish immigrants who maintained a modest agricultural operation on 22 acres of surrounding land for most of the century. In 1995, James Breen, Jr. died and the property came on the market. A campaign was launched to save the house and land from development. Through the efforts of a public-private task force, money was raised to ensure that the Thoreau birth house would be preserved and used for the public good.