A Visit to Two-boulder Hill

“Went to what we called Two-Boulder Hill, behind the house where I was born. There the wind suddenly changed round 90° to northwest, and it became quite cold … Called a field on the east slope Crockery Field, there were so many bits in it.” ~ Henry Thoreau, Journal, January 31, 1860

One morning at the end of March, six people accompanied me on a nature writing walk to Two-Boulder Hill, behind Thoreau Farm. We were armed with our journals and open eyes, ears, and minds. We were awake and alive. We wanted to see what we could see, on this muddy day that happened to overlap both winter and spring. The sun was shining and the robins were bobbing for worms in the front yard when we started out. We hoped to beat the expected heavy rain, which we had heard would arrive by afternoon. Off we went.

Following Thoreau’s advice, we were also determined to leave behind all of the big concerns of the day, including the unrest in Ukraine, the search for the Malaysian jetliner, and the devastation left by that massive mudslide on the opposite coast. “I am alarmed when it happens that I have walked a mile into the woods bodily, without getting there in spirit,” Henry wrote in the essay called “Walking.” “It sometimes happens that I cannot easily shake off the village. The thought of some work will run in my head and I am not where my body is – I am out of my senses. In my walks I would fain return to my senses. What business have I in the woods, if I am thinking of something out of the woods?” Yes, for at least a few hours today, we wanted to shake off the village and return to our senses. If we each found something nifty to write about, so much the better.

We stepped carefully around a few remnants of winter: some random patches of snow that had hardened into thick, slick ice. And we considered with wonder this landscape that had been covered for months with more layers of white. We found spots where we could only suspect that something tragic had happened. The sight of several piles of gray fur with no visible skeletons raised more questions than it answered. Several scat deposits lay in the middle of our path as well: one from a rabbit (perhaps), and another from a coyote (perhaps). (Note to self: Next time, bring along an animal tracking book that identifies such droppings.) The green fungi on a fallen log caught our interest, too. 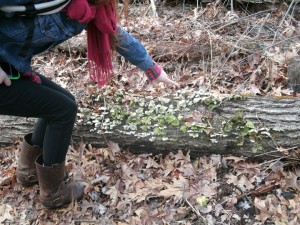 We crossed what Thoreau called “Crockery Field.” Its tall grass from last summer had been flattened by the snow. If you looked closer, though, you could see bits of green moss peeking out from underneath the sharp tan blades. The story goes that before Thoreau’s day, this place was owned by a man who worked at the Middlesex Hotel on Monument Square in Concord. He brought home the slop bucket from the hotel kitchen in order to feed his hogs. That’s why Henry found bits of the hotel china in the dirt. More pieces may still be here. 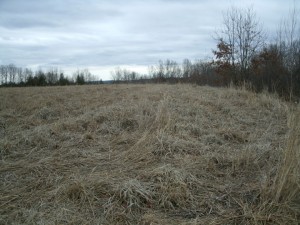 We spent a good long while at Two-Boulder Hill. Each one of us found a sitting space where we were inspired to write in our journals. Some climbed up onto the actual boulders. From the nearby woods, we could hear the sounds of occasional birds, like cardinals, chickadees, crows, and woodpeckers. Sitting as we were in the direct line of Hanscom Field’s east-west runway, we also had low planes flying over us, on their way home. Each one of them had a different voice, too. 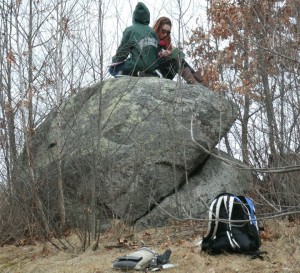 I scribbled some of my own thoughts into my notebook. Then I began to notice a growing rustling. The sunlight had faded, and the air had chilled. The shrub oaks on this hillside were still holding on to their brown leaves from last fall. A sudden wind was now blowing through them. I turned back to see what Thoreau had written in 1860. “There the wind suddenly changed round 90° to northwest, and it became quite cold.” I tried to orient myself and imagine the compass directions. Was this wind coming from the northwest? Maybe. I smiled and shook my head. We had wanted to follow in Henry’s footsteps. We sure had. We were experiencing something very similar to what he had felt at this very spot, 154 years ago. Wow!

When our group came back together for the return trip, I wasn’t the only one smiling. The others had felt and heard the wind change too. We all got the Thoreau connection. We couldn’t have planned our adventure any better.

The clouds were really rolling in when we got back to the house Henry was born in. Sure enough, the rain began soon afterward. Our timing was perfect.

We shared a few of our own impressions with the others. The fifth-grader had picked up a cool rock that she deemed as being “igneous,’ having just learned the three categories of minerals. We encouraged her to take it to school the next week. Then we parted our temporary and pleasant company. Each one of us left with a lot to think about. And none of it would be broadcast on the evening news.