Posted on March 6, 2019 by Margaret Carroll-Bergman | Comments Off on Solid Seasons — The Friendship of Henry David Thoreau and Ralph Waldo Emerson 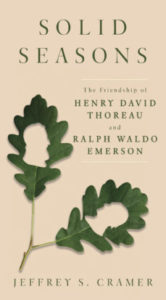 Make no mistake, Solid Seasons by Jeffrey Cramer (Counterpoint Press, release date, April 9, 2019) is a scholarly work.  By page 20, liberal use of Henry Thoreau’s and Ralph Waldo Emerson’s prolific writings, has generated footnotes accruing to 60; were such a span represented by a snowstorm, the going might be deep already.

Yet, Cramer’s lucid, spare writing and deep knowledge join one quotation to the next without seeming effort. The book’s two primary characters become familiars, each one easily approached, often via the observation of the other. Cramer has a knack for choosing and integrating his subjects’ words, and from that you get sentences and stories that are easy walking. That sums to a wonderful read, both for the general reader interested in Emerson and Thoreau, and for those who feel themselves academic family to these two famous 19th-century thinkers and writers.

I spent more than 20 years teaching Henry Thoreau’s work and helping 17-year-olds plumb his presence in his and our worlds. And so I knew a number of Thoreau backstories, those narratives that arced together to help shape him. Famous among them was the enduring one that I always thought of as Henry and Waldo, or, on occasion, Waldo and Henry. Surely, without this linkage, each man’s life would have been different, substantially so. For starters, Henry’s Walden experiment might instead have been called White; or, Life in the Woods (after White Pond), or Flint’s, after the nearby Lincoln, Massachusetts pond. Or perhaps those 2+ years might have gone over to other experience and work entirely instead of being sited at Waldo’s woodlot on Walden Pond.

As Cramer points out, “Any biography [study] that concentrates on either Thoreau or Emerson tends to diminish the other figure because that person is, by the nature of the biography, secondary.” Solid Seasons has a different aim: “In this book, both men remain central and equal.”

And that is so. To achieve this balance, and so to better know the deep effects each man had on the other, Cramer has done what he does so well: He has gone deep into each man’s writings, published and unpublished, and into the galaxy of others’ words surrounding these two central American thinkers. The result is a deeply pleasing three-part book.

The tracery of Part I is most fascinating. Cramer finds each man’s musings about the other in their letters and journals, and he locates them also in the letters and journals of others, Lidian Emerson, for one. These insights are attached to a scaffold of time that climbs to conclusion with Thoreau’s death. The written record Cramer develops reveals the bumpiness of this friendship and the inevitable bruisings when two such capacious minds and varied personalities find (and finally) revere each other. Thoreau’s flinty contrarian presence was rarely an easy companion for Emerson’s more accepting, universal one. And yet the pull of one on the other is always evident. What a gift that they lived together in time and place.

As if to affirm this gift, near the end of Part I, Cramer repeats Emerson’s observation from 1852: “Thoreau gives me in flesh and blood and pertinacious Saxon belief, my own ethics. He is far more real, and daily practically obeying them, than I; and fortifies my memory at all times with an affirmative experience which refuses to be set aside.”

Jeffrey Cramer is also a precise reader and writer. Here and there throughout the book, he takes on some of the apocrypha that have grown around Thoreau and Emerson. One footnote’s example unhorses the supposed exchange between the two when Thoreau is in jail for nonpayment of taxes: Emerson: Henry, what are you doing in there; Thoreau: Waldo, what are you doing out there? Cramer: “That dialog did not take place.” The truth of this relationship, Cramer implies, is ample and deep; no need for fabrication.

So Solid Seasons begins with an interleaving of Thoreau’s and Emerson’s words and actions as they find, sometimes collide with and come to love each other. Yes, they encounter famous impasse and episodic disappointments; one would expect no less of two opinionated, brilliant people, who differ in age and temperament. The book also brings them together with their ongoing efforts to know each other, and finally with Emerson’s eulogy for Thoreau that affirms both men.

This return to each other gives body to the 1878 anecdote Cramer uses to conclude Part I. It comes from a writer’s visit with Emerson near the end of his life. Emerson’s memory was fading in some measures, but strong still in much.

As the two writers talked, Emerson called out to his wife in the other room: “What was the name of my best friend?”

Just so, I thought as I closed the book.

Sandy Stott is the author of Critical Hours: Search and Rescue in the White Mountains. He is founding editor  of  The Roost and retired chair of the English Department at Concord Academy. Sandy lives in Brunswick, Maine.

This entry was posted in General, Henry David Thoreau, The Roost and tagged Solid Season. Bookmark the permalink.