A Loch Ness Monster in Long Lake? Or, if Humans Are Creatures, Can Creatures Be Human? 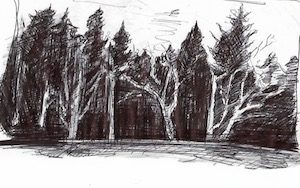 Sketch depicts the south shore of Long Lake in Littleton, Massachusetts, where the monster was spotted. Credit: John Hanson Mitchell

Dr.Timothy Ahearn. who holds a degree in aquatic biology, and Dr, Lawrence Millman, an ethnographer and an authority on aquatic animals, were boating along the shores of the lake around 11 PM when they saw a large serpent-like form rise out of the water. The creature stared at them briefly and then arched its back and submerged.

“It looked like your classic Loch Ness Monster, “ Millman said. “Or descriptions I’ve read of Lake Champlain’s creature, Champy, and I would have thought I imagined it, except that Tim saw it too.”

“Neither Larry nor I could believe what we saw,” Dr Ahearn said, “but after it disappeared, our mutual descriptions matched. The thing rose no more than four or five feet above the water and it had a slim snake-like body and a head that resembled some sort of reptilian otter. In fact, we both at first thought it was an otter, but its body was too slim and snake like and far too long.” 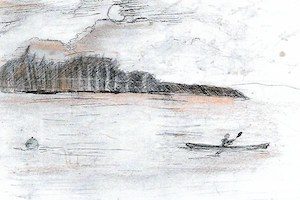 Long Lake, it should be said, does harbor some unique aquatic species. Every August, a host of nickel-sized jelly fish appear en masse in the waters. These were identified a few years ago as Craspedusta sowerbii, a rare species of freshwater jellyfish that occurs in the Yellow River in China, as well as Long Lake and a few other sites in North America.

And Dr. Ahearn, who lives on the lake, has seen a giant water scorpion just below the clear black ice, also immense water bugs. Eels, black water snakes and an unusually large snapping turtle have also been seen in the lake over the years. Furthermore, there was a legend among the local Nashobah Village Indians of a lake creature know as the Ap’chinic, although that “species” lived in Nagog Pond, and was more like a giant octopus.

Dr. Millman, who is a Research Associate at Harvard University, spent several afternoons reviewing the literature on Native American lore and historical reports of local sea serpents but could find no reports, other than the Ap’chinic, and several sightings of a sea serpent in Massachusetts Bay in the mid 19th century, later disputed.

Sea serpents, lake monsters, winged snakes, dragons and the dreaded, ship-swallowing, deep water squid known as the Kraken are, of course, the stuff of legend and myth. But as geographers, anthropologists and crypto-zoologists, point out, the legends and folk-tales of pre-literate cultures often reflect real creatures and prehistoric geologic events such as world-wide floods and ice mountains.

For example, the Nashobah people, a seventeenth century group of Christianized Indians believed that the four winds were trapped inside Nagog Hill and would periodically roar and thunder and shake the very earth. Geologist later determined that the area is an epicenter for earthquakes.

Loch Ness and Lake Champlain are known for their depths, and were both connected to the sea after the retreat of the glacie, the theory being that Pleistocene sea creatures were trapped in the lakes when the lands rose after the ice retreated. Long Lake, by contrast is shallow and spring fed, not prime territory for monsters of the deep.

One other detail, for what it’s worth, is the fact that the Long Lake serpent was seen around Halloween, a period when cultures around the world record extraordinary events; the dead can walk, spirits rise from the earth, and bats, witches, dragons, flying snakes and other “mythic” creatures course through the air.

It is also the time of year when the so-called Wild Hunt would pass over. Ghostly hunters, eternally damned, would touch down on earth in this season in the form of high winds and carry people away, only to have them return weeks, or even months later with no memory of where they had been.

So why not a local Long Lake primordial water dragon?

“This thing was benign,” Millman said. “Not dangerous. It just stared at us briefly in curiosity. Littleton should be honored to host such a rare being.”

Comments Off on A Loch Ness Monster in Long Lake? Or, if Humans Are Creatures, Can Creatures Be Human?

Filed under General, Nature, The Roost