“We can never have enough of nature.” — Thoreau, “Spring,” Walden

When the hoopla began to swirl around the arrival of the solar eclipse, my inner nonconformist rose to the occasion. If everybody was going to watch this show, then I decidedly would not. I would not get special glasses. I would not make a cereal box viewer. I would not travel miles upon miles to get closer to the line of totality. No, no, no. I was determined instead to have as average a day as possible.

And yet, I wanted to be outside for the duration of the eclipse. I wanted to be in a natural space. I knew the rules about looking at the sun with unprotected eyes. I wouldn’t look up. Instead, I would look down and around at the effects of the changing light on the earth. I would listen to the world to discover if it was temporarily different. I would focus on the setting and on the supporting actors, and not on the event headliners. I would find my own way to have a unique experience.

So I chose to spend two hours doing some long-overdue maintenance in my own yard. I pulled a few weeds and I trimmed a few bushes and trees, even as the sun and the moon fell into alignment behind my back. I cocked my ears and thought I heard a special quietness. Very few birds sang, and only the occasional crow called. Then again, I didn’t know what their normal routines were for a typical sunny afternoon in August. Maybe the landscape was always this quiet. I clipped a few more errant branches as the minutes passed.

When the yard got shady and the air felt cooler, I marveled at the change. But it was too early in the process, and it was only because a cloud had passed overhead. The sunlight came back even stronger, afterward. I dragged my weeds and cut branches to a back corner of the yard.

Gradually I heard the voices of folks in the neighborhood who were standing outside, taking in the view. They talked amongst themselves and ooohed and aaahed at the proper moment, when we finally got 75% coverage of the sun. There was a little more shade in my yard then, but not much more, and not for long. And I was slightly disappointed when the sunnier spots under my trees didn’t turn into wispy crescents like they were supposed to. Ah, well. I’ve already made many wonderful natural connections in my lifetime. This moment didn’t have to be one of them.

And I did find some small treasures anyway, while I tidied up the place. An abandoned shell of a cicada was attached to a branch in the Japanese maple. The spiky seed balls are beginning to grow underneath the sweet gum leaves. And two lantern plants have suddenly decided to sprout in the needle-duff under the pine tree. “Heaven is under our feet, as well as over our heads,” as Henry would say. It’s true. And these kinds of miracles happen all the time. “Everyday” doesn’t necessarily mean “ordinary.” 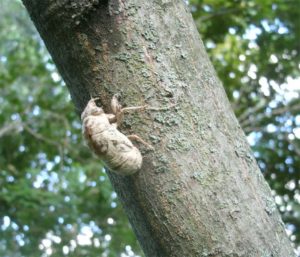 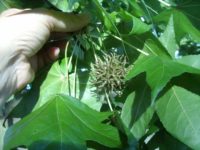 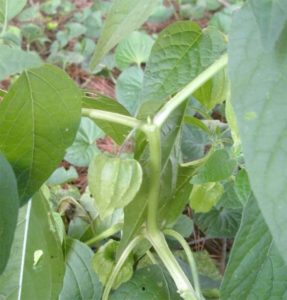 I think it’s terrific that a natural phenomenon fascinated more people than any championship athletic event ever could. This show did involve two round objects. But these we cannot throw, hit, or kick. We can catch them, though. In fact, we can catch their unique light performances nearly every single day. They deserve to be watched more often than for a few minutes at a certain time, once every seven years. And they always offer their best magic for free.

So I ask: What are you eclipse-watchers doing today? You can keep the momentum going, you know. You can watch sunrises and sunsets. You can check out the phases of the moon, in daytime and at night. You can turn your eyes to the earth and see all the marvelous stuff that we’ve got down here. You don’t have to travel to dynamic landscapes or wait for dramatic special events to connect with nature. It is all around us, all the time. Pay attention to it deliberately, and it will reveal its wonders to you.

Yes, you should savor your own recent experience. And I also urge you to continue your own personal nature study every day from now on, in your own neighborhood. Marvels await. You may be able to touch them. And what you find here may eclipse even the eclipse.