Winter patience in the not-so-great indoors

On the morning of the second “big” sno’easter of Winter 2016/2017 to hit Nantucket, with a forecast of 60 mph gusts and five to eight inches of snow, I was sitting at the edge of my bed re-bandaging a wound on my left foot. 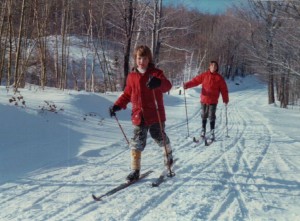 Matt and Peter Brace skiing down Pine Mountain, Maine, during a back country adventure. (Circa 1979)

A podiatrist prescribed the daily bandaging procedure and forbade me from walking other than for daily needs for two weeks, an eternal Hell for my dog, Kismet, and me.

Normally, I’d be lacing up my hiking boots to go walk two or three miles; a year-round, circadian ritual I live for. And, I love winter! In fact, only spring barely approaches the nirvana of winter in my mind.

On Nantucket during the winter, the island is empty of visitors. With more than 60 percent of our 30,000 acres protected from development, 45 percent of it conserved as open space, and no dog harassing middle mammals, including raccoons, coyotes, skunks and porcupines, Nantucket is an ideal place to explore by shanks mare.

Having missed almost all of January to a debilitating cold and, recently getting back out into my hiking routine, to then be benched again was dispiriting given my new line of work.

In 2015, I’d launched a guided natural history hiking service on the island. After writing about the natural world on Nantucket for most of my career, guiding hikes around the island just sort of felt right.

My parents were my guides to the outdoors, but mostly my father.

I grew up in Concord, MA, where conservation land exists in abundant acreage relatively on par with Nantucket’s. With the parents divorced by the time I was 10, Pop didn’t slacken into the single dad who squandered father-time with his kids at malls, movies, the zoo or museums. Instead, we explored every inch of Concord open to hiking, cross-country skiing, orienteering, skating and swimming.

Our Thoreauvian adventures included but weren’t limited to the Hapgood Woods, the Walden Pond woods, the Estabrook Woods, the woods between there and Middlesex School, the Wright Woods, the Seton Woods, the Great Meadows and the Upper Spencer Brook Valley, 18 acres of which land my grandmother Elise Huggins donated to the Concord Conservation. I know he felt every second of exploring the outdoors with his children were teachable moments and that he reveled in his new role albeit forced as it was.

Now, through my business, Nantucket Walkabout, I think I’ve gotten inside Pop’s Thoreau psyche and learned some of the boundless pleasures of teaching adults and children as I guide them around the island.

A few months before his passing on Aug. 21, 2014, I saw my dad using a brand new purple Swiss Army pocketknife, cursing while explaining that he’d recently lost his original maroon one. A few days after his death, I found that knife under the cushions of his couch by the wood stove where he took his naps. Upon inspection, I realized that this was the knife he’d had most of my life because the main blade’s tip was rounded over and the blade itself well worn from decades of use and sharpening.

He had countless uses for it on our hikes together hut to hut in the White Mountains of New Hampshire, on Mt. Katadin and the mountains in Acadia National Park in Maine. I imagined it’d been a talisman for him, a direct link to his more active days, cherished and yet still handy.

So, here I was using my father’s pocketknife — maybe hoping for a little trail magic — to diligently keep to my bandaging schedule so I could finally get out walking again to get in shape for my season, my winter patience now worn thinner than his old blade.

Editor’s note: Peter Brace is a prize-winning journalist and environmental writer and the author of  “Walking Nantucket: A Walker’s Guide to Exploring Nantucket on Foot,”  and  “Nantucket: A Natural History.”

Comments Off on Winter patience in the not-so-great indoors