I’m in my morning sun-chair, and today, approximately a month after solstice, the sun’s strong enough to wrinkle my brow as it bears in from the southeast. Every so often it slides behind a thin pine; then, ticks later, it’s back, and, faintly, it warms. “It will be long coming,” seems the promise of more light and warmth given, “but it will be.”

It occurs to me that I have a new way of measuring time’s passage. I have a woodsclock. That “clock” is the small stand of white and pitch pines outside my southeast window. As the sun rises along its shallow, winter arc, it slides behind this irregular grouping of trees; their shadows shift bluely over the snow. Today, they began their passage pointing in my direction, fingers of shadow amid shafts of light. Then, as the sun worked across the southern sky, they shifted toward parallel. Finally, now, as late morning comes on, the shadow-digits have begun to point away from me before disappearing entirely as larger trees block the sun’s light. 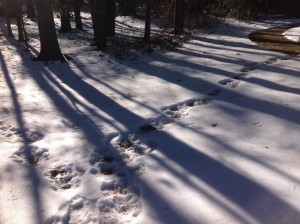 Many hands of the clock

Time, my woodsclock says, to rise and shift the focus of my day.

This entry was posted in Arts, Environment, General, Nature, The Roost. Bookmark the permalink.