Posted on July 4, 2014 by Sandy Stott | Comments Off on Dependence Day

Like many of us, Henry Thoreau headed for the shore as his summer deepened. After all of June’s recorded nestings and fledgings, perhaps he too had the need to travel some beyond Concord. And, of course, this date must have resonated for him annually, because ten years before, he had set out for his life-defining sojourn at Walden. 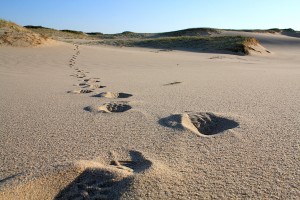 But what I like about Thoreau’s journal entry for 7/4/55 is its short dialogue with a ship’s captain and its exclamation points of consternation. Here it is in its entirety:

To Boston on way to Cape Cod with C.
The schooner Melrose was advertised to make her first trip to Provincetown this morning at eight. We reached City (?) Wharf at 8:30. “Well, Captain Crocker, how soon do you start?” To-morrow morning at 9 o’clock.” “But you have advertised to leave at 8 this morning.” “I know it, but we are going to lay over till to-morrow.” !!! So we had to spend the day in Boston, – at the Athenaeum gallery, Alcott’s and at the regatta. Lodged at Alcott’s, who is about moving to Walpole.

There, in a brief exchange and three exclamation points of comment, is summary of all summer travels, especially the dependent kind. Thoreau’s day passed pleasantly enough, it seems, though we get no comment about the gallery or the regatta, both of which we’d like to see through his eyes. And of Alcott we learn the expected: he is about to move…again. Instead, it is the waiting to travel and Captain Crocker – stand-in for everyone in charge of getting us somewhere – that draw Thoreau’s sparse comment. Once “there” – on the Cape – his subsequent entries swell with detail again, and we see what catches his eye. But here on the 4th, we wait and feel lodged in its amber room. Independence will have to wait too.

Getting to the Cape has always been troublesome, it seems.