In Touch with the Past

Many of us read Henry Thoreau for the way he reaches forward from his world and touches our lives. In his journals, he often seems a conversant, albeit deeply learned, neighbor who has come over to tell us of his newest sighting or thought. But in his particularity, in the fine grains of his writing, Thoreau also enables his readers to touch the past, and thereby span more than just a lifetime.

A number of years back, we received a gift from an acquaintance who had reviewed books for the local paper my wife, Lucille, edited: the book-heavy box contained culls from an octogenarian’s library, but it was also clear that Eleanor Parkhurst was looking for a home for these particular books. I unpacked and found the central tenant of the box was a set of blue, hardcovers with lettering only on their spines. Thoreau’s Writings, it read, and my heart fluttered; they were twenty in total, and the title page gave me their provenance: this was Houghton Mifflin’s set of Thoreau’s writings, edited by Bradford Torrey, published in 1906.

I was put in mind of all of this the other day while reading my copy of Thoreau’s Journal from 1855, and it was the volume itself that did the prompting. Part way through the June 2nd entry, I turned the page…and lost my way; I’d turned two pages, and the rest of that day was hidden between two joined sheets. I reached for the sharp buck-knife I now keep beside me when reading these volumes, slipped it between the pages and drew it carefully outward and down, releasing these two pages 108 years after their printing for the first time. I was their first reader. And that seemed to clear my sightline to that day. 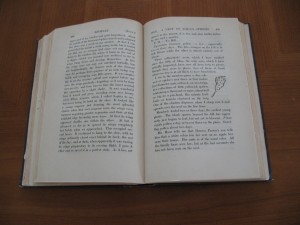 On the newly-free page, “About the middle of the forenoon Sophia came in and exclaimed that there was a moth on my window. At first, I supposed that she meant a cloth-eating moth, but it turned out that my A. cecropia had come out and dropped down to the window-sill, where it hung on the side of a slipper (which was inserted into another) to let its wings hang down and develop themselves.”

Thoreau goes on, predictably, to precise description of “how it waxed and grew, revealing some new beauty every fifteen minutes, which I called Sophia to see…”

In the wonder of the moment, in the brother calling his sister to come see, I had slipped into the room, and they had materialized in mine; there is something about cutting your own pages that brings this migration about.

Comments Off on In Touch with the Past