One January day, I put water in the kettle and turned up the heat. While I waited for the boil, I stared out of the kitchen window at nothing. It was a cloudy winter afternoon, and the back yard was shaded in tones of brown. Brown trees grew out of brown grass in front of a brown-gray fence. A pile of brown leaves and compost stood nearby. Soon I would be slurping my hot brown tea to ward off the brisk brown chill.

A flash of brown and white dropped from a tree. It was a hawk, aiming for his lunch. “Wow, a hawk!” I cried to my father. “Come here, quick!” But the guy outside must have missed whatever prey he was after, because he quickly flew out of view, with empty talons. My father wasn’t fast enough. “Never mind, he’s gone now,” I said, as Daddy came up behind me. “He was a big one, though.”

My father and I were newly reunited, and we were still learning each other’s habits. I had been teaching him about hawks, my favorite birds. I love to drive around and spot them sitting in trees, especially at this time of year, when no leaves impede their view, or mine. A few days earlier, I had gone out of my way to pull our car into a convenience store parking lot, just to show my father the beautiful red-tailed hawk who was perched on the gasoline price sign. Hundreds of oblivious others just drove past. My father was getting used to hearing, “Look, there’s a hawk! See it?”

I filled my brown teapot and resumed my window post. I hoped the hawk was still in the area, and that we’d get another chance to see him. Sure enough, there was an extra glob of brown out there. The hawk had returned, and he was sitting on our wooden fence. I called my father back. It took more than a minute of my pointing and explaining for him to see the hawk. But he did. And then the bird took off again. He was magnificent.

Someone in my past used to needle me because I was always saying, “look and see.” He maintained that the two words held exactly the same meaning, and that I was therefore being forever redundant. I could never quite convey to him just how different the concepts of “look” and “see” are. Henry Thoreau certainly knew the distinction. Anyone can LOOK by directing her eyes toward an object. To truly SEE something requires perspective, position (location and opportunity), patience, and practice.

Weeks later, as I put the finishing touches on this post, I walked out to the kitchen again to get more tea. My eyes were drawn back to the window while my cup was circling in the microwave. I was thinking of the hawk and wondering where he’d gone. Just then I realized that he had come back! Again, he was sitting on our fence, right where we’d seen him before. Now it didn’t take as long for my father to find him, and we even had enough time to grab the binoculars and bird identification books. But not the camera. Next time, for sure. And the next time we may also be able to verify that our visitor is a broad-winged hawk. 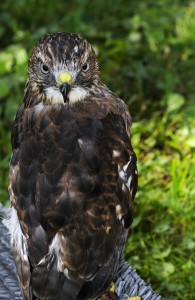 We spend most of our waking hours passing through familiar territory: our homes, our cars, our commute routes, our schools and workplaces. We know these landscapes so well that we need only to glance at their edges in order to sleep-walk along their paths and through our routines. But what’s beneath these surfaces? What’s using camouflage to blend in with its environment? What are we missing, day after day? .

“To be awake is to be alive,” Thoreau told us. Stop. Look. Go beyond the familiar. Scrutinize. Open yourself up to further possibilities. You may very well see something remarkable. A hawk may be waiting.