“I say, let your affairs be as two or three, and not a hundred or a thousand; instead of a million count half a dozen, and keep your accounts on your thumb nail. … Simplify, simplify.” ~ Henry D. Thoreau, Walden, “Where I Lived, and What I Lived For”

‘Tis the season for making resolutions. And if you happen to be on the prowl for suggestions for personal improvement, you need look no further than to Thoreau’s classic admonition to Simplify. He even clarified his statement with some additional advice: “A man is rich in proportion to the number of things which he can afford to let alone.” As with any of his sayings, this sentence is open to individual interpretation. What should we “let alone,” Henry? Our bad habits? Junk food? The tendency to become couch potatoes in front of glowing blue screens, hour after mesmerizing hour? (Darn that Facebook, anyway.)

For me, it’s about being bogged down by Stuff. All it takes is the process of moving to bring you face to face with how much junk you really have. In 2012, I was forced to move my household twice. That’s right. All of my possessions were moved twice in under six months. The first time was to another apartment in the same town. The second time was to a rental house in another state. In both instances, I did most of the work myself. I filled the cardboard boxes, carried them up and down several flights of stairs, and loaded them into the car or the U-Haul. When we reached our so-called final destination, I pulled everything out and stacked it into a room at random. Then it was off to repeat the process, ad infinitum. I didn’t have time to do any pre-move sorting. The save-or-toss decisions would have to come later.

Well, now it’s later. And a space that most decorators would call a “bonus room” is instead the “box room.” Dozens of them are piled high. This is the result of living more than fifty years on the planet. Here are some of my childhood toys and craft projects. Then, there are paperwork remnants of every job I’ve ever had. Add to it: the partial contents of the family home my father sold in 1994; the one my aunt and uncle sold in 2008; as well as residual tokens from the apartment of a deceased friend in 2010. There are four bins of piano music, even though the piano was left behind in Illinois in 2003. There are wedding presents I got in 1983, even though the marriage itself lasted only eight years. There are varying numbers of trinkets and knick-knacks. This landscape is the epitome of quiet desperation. I have no option but to simplify. 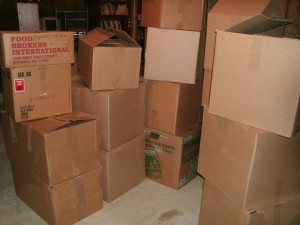 Inhabitants of the “bonus room”

I have two real-life role models in this endeavor. My friend Marie just went through a purge, when her house had been put up for sale and she herself was preparing to move. But I couldn’t resist when she called me to help her get rid of her extra office supplies. Now I need never buy another notebook or file folder. Another friend named Maud told me that she once faced the same problem with boxes from the past. Eventually, she took drastic measures and got rid of them without lifting a lid or peeking inside. She just made them disappear. I lack such courage.

Yes, Henry, I need to figure out what things I can afford to let alone, i.e. which items I can recycle or give away. In the time it took me to pen this post, I could have sorted through at least one box. I guess I have a priority problem, too.

One response to “Resolved: Simplify, Simplify: Easier Read Than Done”