Down Came a Spider

Ask anyone who knows me. They’ll confirm that my main priorities in life do not include housekeeping tasks.

So I wasn’t completely surprised one morning when a spider appeared in front of me as I was standing at the kitchen sink, washing the dishes. (Yes, every few days I wash the dishes by necessity, by hand.) She had dropped down from her nearly-invisible web at the place where the wall meets the ceiling. She just hung there, by a thread in mid-air, right at my eye level. “Hello,” I said. “How are you? Is your name Charlotte?” I laughed at my joke. If she responded, it was in a way or in a language that I could not decipher.

What could I do? My hands were wet and soapy. I didn’t want to hurt this spider. But I did want to discourage her from landing on the counter, where she could get accidentally crushed. So I came up with the idea of disturbing her lightly by blowing in her direction. My breath made her sway toward the window. After a few seconds, she got the message. She hoisted herself back up to her ceiling perch. Quite quickly, too. Spiders are amazing creatures.

A few days later, when I was washing the dishes again, Charlotte came down to visit me a second time. Now I gave her a good look as I talked to her. I saw that her two front legs were longer than the other six, and they looked as if they had little hooks on them. She was so tiny, though. She was smaller than the fingernail on my pinkie. When I blew in her direction this time, she dropped down to the edge of the cat’s water dish. Oh no! Had I drowned her? Evidently not. She sat there for a bit, then once again hoisted herself back up to the ceiling. I was still amazed.

The third time she dropped down in front of me, I decided to get an even closer look at her. I wanted to figure out what kind of spider she was. So I wiped off my hands and went into another room to grab a magnifying glass. When I came back to the kitchen, Charlotte was close to the counter. I moved the magnifier gently over her and leaned down to get a peek. Well, she was having none of this. She must have seen my action as an intrusion of privacy or even an outright threat. She nearly flew back up to the ceiling, seemingly in a rage. I was disappointed, but I understood. I put the magnifier away and finished washing the dishes. Every once in a while, I looked up and spied Charlotte sitting in her web near the clock. I sensed anger and a feeling of betrayal. I apologized to her for my arrogance. 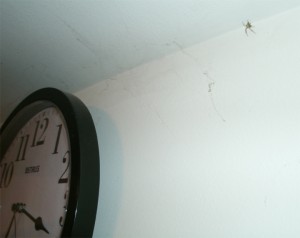 As I thought about these encounters, I wondered if Henry Thoreau had any similar meetings with spiders. I searched his journal entries and didn’t find any appropriate passages. Then I realized the obvious secondary connection: E. B. White, renowned essayist and author of the children’s book “Charlotte’s Web,” had been a devoted fan of Henry Thoreau. Perhaps it was this inclination toward a close inspection of nature that drew him to study and to write about a spider in “Charlotte’s Web” and a mouse in “Stuart Little.” I decided to follow this diversion and briefly revisit White’s Thoreauvianism.

Elwyn Brooks “Andy” White (1899-1985) first read “Walden” as an undergraduate at Cornell University. It became his favorite book and the one that affected him the most. In an essay simply called “Walden,” White shared the details of his pilgrimage to Concord in June 1939. He drove into town on MA Route 62. (MA Route 2 had yet to be built.) He walked to the pond via Main Street, Thoreau Street, and MA Route 126. He passed the Golden Pheasant lunchroom and the Walden Breezes trailer park before heading downhill for the shoreline. He spoke of bathers, boaters, and the litter lying around the park. Thoreau’s house site was marked, but not as exactly as it is today. And White didn’t think very highly of the cairn, even though he found a rock to add to it. “It is a rather ugly little heap of stones, Henry,” he wrote. He walked back to the town center along the railroad. It’s difficult to know if he considered the trip worthwhile or disappointing. His total bill for staying one night and eating at Concord’s Colonial Inn came to $4.25.

In 1954, the 100th anniversary of the publication of “Walden” stirred White to write an essay that was both a tribute and a literary analysis. It was published variously with the title “A Slight Sound at Evening” or “Walden 1954.” Nearly every sentence glows with admiration. Even White found it difficult at times to be so enamored with Henry and with “Walden.” “To admire the book is, in fact, something of an embarrassment,” he wrote, “for the mass of men have an indistinct notion that its author was sort of a Nature boy.” Not that there’s anything wrong with that.

I enjoyed reading E. B. White’s essays, but I had to return to the present day. Naturalists will tell you that you’re never more than three feet away from a spider. Our Charlotte has been busy in the past weeks, catching flies and other tiny insects in her ever-enlarging web. She finally dropped down to see me yesterday when I was washing the dishes yet again. This time, it was just a chance for us to say hello to each other. Then she pulled herself back up to the ceiling. I think we’re on good footing again.

Charlotte provides a nice little pest-removal service for us. Maybe I don’t need to know exactly what kind of spider she is. She’s a helpful and social one. And thanks to fellow Thoreauvian E. B. White, I can at least give her a first name.