The songbirds here are like nothing I have ever seen or heard, not when I lived in Virginia, or West Virginia, Maryland, Alabama, or London, England, or even at other locations in Pennsylvania. Bluebirds, scarlet tanagers, goldfinches, orioles, and more: the colors bust out like tiny sprays of rainbow, as bright as the sun, as clear as the sky. The songs are trilling and cool, thrilling and crackling, burbling and cackling. It must be that the wooded two-acre forest edge of our small Creekside farm creates a much-needed roosting and feeding spot in the middle of the wide-open swath of cultivated farmland that surrounds us here. 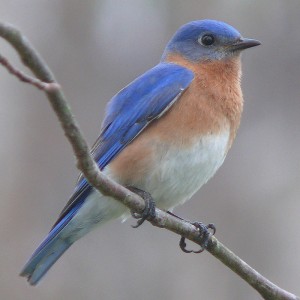 In his chapter in Walden entitled “Sounds,” Thoreau speaks of the birds close by on numerous occasions: of the birds who “sing around or flitted noiseless through the house,” while Henry sits in his “sunny doorway from sunrise till noon, rapt in a reverie, amidst the pines and hickories and sumacs.” Or he tells of the nearby tree branch that is “bending under the weight of the reed-birds flitting hither and thither,” of the sad sounds of the screech owl that remind him “sometimes of music and singing birds; as if it were the dark and tearful side of music, the regrets and sighs that would fain be sung,” and finally of the cockerel, our common rooster, which was once a wild pheasant–“This foreign bird’s note is celebrated by the poets of all countries along with the notes of their native songsters.” Thoreau is often wondering at birds of Walden Pond.

Here at Creekside, we are in the midst of several thousand acres of open space that stretch out to the east and to the west along the center of the Great Valley, with the North Mountain off in one direction and the much older South Mountain off in the other. This South Mountain, which rises near Mount Holly Springs, is renamed the Blue Ridge when it reaches West Virginia and Virginia. According to my geologist colleagues, it is one of the oldest mountain ridges in the world, almost three-quarters of a billion (750,000,000) years old. There were once mountain peaks here that rivaled the five-mile-high Himalayas, but they have been eroded and worn down over millennia to their current 2,000-2,500 foot height.

The wide-spreading oxbow of the Conodoguinet Creek twists its way through the valley here, with huge tree-filled circles, open plowed spaces, and scrub brush fencerows. There are lots of wide spaces of land with few trees at all, no trees for roosting or food spotting, no nesting holes or tree-close clearings for wild mating dances. So the songbirds come to our exceptional and unusual two-acres of Creekside trees; these birds come in their dozens: no, in their hundreds. On some mornings there are too many separate songs to count, too many different body styles to keep track of, and too many various feeding habits to follow. 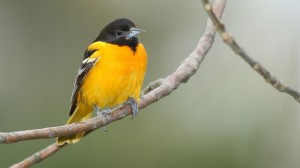 The oriole is by far the most startling of these songbirds, a veritable clown-bird, with a bright orange-yellow color that is just as bright as the brightest of Halloween pumpkins, then suddenly saturated with black stripes and splotches spread between the yellow-orange outbursts. Next come the bluebirds, not so much sky-blue as some secret Mediterranean blue or ocean blue–known only to world travelers–always one pair of these bluebirds at least, nesting in the small bark-sided bluebird nest tacked to the northwest side of the house. The male bluebird always perches out alone on a stalk of paradise tree that rises out of the abandoned fire circle, an overgrown scrub spot in the middle of the lawn. 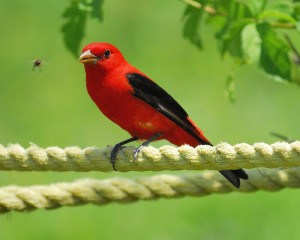 Then suddenly, the scarlet tanager flashes brightly, so brightly it is hard to believe this is a natural color, and then a third bluebird, and just as quickly comes a songbird’s call that I have never heard any version of, a new sound: fluty and liquid, delicately musical and very wild at the same time. And always, of course, there are swifts and starlings, blackbirds and sparrows, flycatchers, mockingbirds, and blue-jays, and even a massive red-tailed hawk roosting and hunting small mammals from the tall locust trees in the small woodlot behind us.

Comments Off on Songbirds at Creekside