“…if not the most beautiful, of all our lakes, the gem of the woods, is White Pond…” Thoreau, Walden

The big news on White Pond is the snow.

It’s falling about three inches an hour, and the folks in our immediate neighborhood, those who live at the end of White Avenue, are out in the street shoveling. The Town’s plow stops just short of our cluster of houses. In the best of weather, a truck with a plow could not make it up the narrow, steep hill and with the blizzard, it’s hard to maneuver a snow blower on the icy road, so we hand shovel.

We live in houses that were originally built as hunting and fishing cabins during 1925 – 1930. Except for being winterized, the cabins remain mostly unchanged. If you did not know better, you might think you had stumbled upon a base camp for an ice fishing expedition. 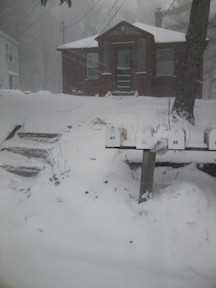 On our side of the pond, the houses are more like wooden tents with furnaces.

These houses are small, about 600 square feet or less, but don’t have the spit and polish or careful design of a modern Tiny House.

In many respects, we live the way people camped pre-World War II. Our houses were built during Prohibition!

Children share bedrooms; no one has a family room or more than one bathroom, and blessedly, there’s no central air.

It’s not Walden Pond, but it is the next best thing.

“White Pond and Walden are great crystals on the surface of the earth, Lakes of Light. If they were permanently congealed, and small enough to be clutched, they would, perchance, be carried off by slaves, like precious stones, to adorn the heads of emperors …” Thoreau, Walden

While the snow is blowing sideways and sticking to our cheeks, we talk about the pond: the toxic green algae that returned in September; the drop in water level; and the dead fawn that was discovered last week floating near the cove.

Had the fawn been poisoned? Did it get caught on a piece of floating ice? Was it shot? No one knows.

Talk of the pond gets us through the task at hand, making us each feel less like we are shouldering an oar. The snow keeps falling, and we’ll be out on the street again in a couple of hours, making another pass with our shovels.

Comments Off on Base Camp: White Pond